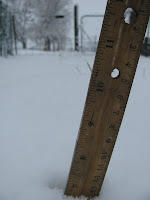 O.K. I know I talked about snow envy earlier this month and then lo' and behold the snow deities delivered a few inches so we would not feel slighted. Well, I'm not sure how my wish went haywire, but obviously those same snow deities got their geography messed up this week and decided to deliver a second storm that dropped a record 7 1/2 inches here in Texas. You know, that place where all the retired RV roaming  Northeners go to , to get away from the stuff.

Now,  we could have gotten down in the dumps about our Winter crops failing, our animal chores increasing and the fact that we were without electricity during the night but instead, we chose to have a "snow day". A "snow day" is what kids pray for back in the North East, so we rolled back the clock for a day,  and did a few things that adults wished they could do on a Tuesday during the beginning of their work week. 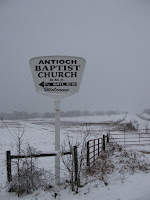 My cowboy artist went into town to get his childhood sled that was stored away in his mom's shed. Unfortunately, he found out that she had sold it during last year's annual citywide garage sale, thinking it would never see action again since her children were all grown up and over 35... undaunted, he looked around and spied his old basket ball hoop that was out by the pool. Now he hadn't shot hoops with that thing in 20+ years, but,  he did notice it had this great plastic base that even had a place to put your feet. I can see the light bulb glowing over his head as he turns a basketball hoop holder into a mean sledding machine.

He came back out to the farm all proud of himself and said "look what we have, it's a redneck sled, I'm going to tie it to the truck and we're going to Antioch (the part of the farm that has hills). I thought he was crazy but having a little cabin fever, decided what the heck, let's go redneck sledding! 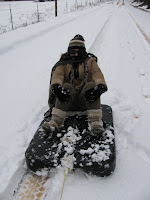 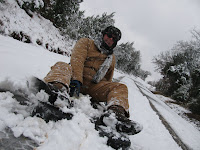 Not only did we go sledding but also built a snowman for his mom's yard, went around town snapping a series of Texas snowmen built by locals and just enjoyed this very rare occurrence. I say "rare" , we will see what March brings us ! 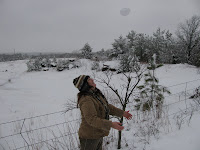 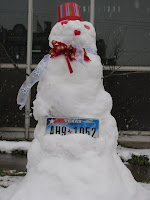 Last year we started our plantings in March but this year we may postpone until April based upon the Farmer's Almanac and other weather forecasters. We are not out of the woods, or possibly , the snow until then ~ 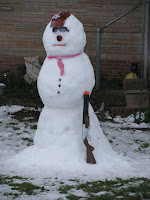 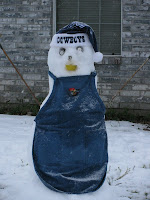 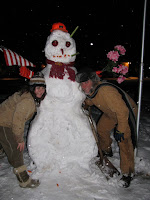