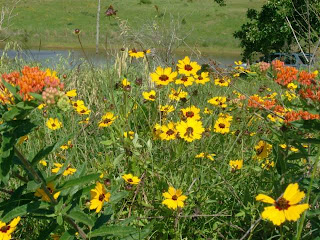 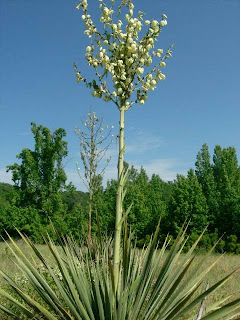 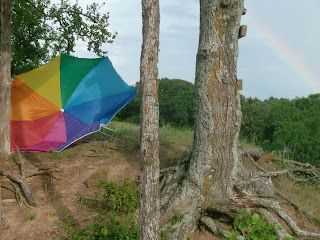 Back from a stay-cation for Memorial Weekend. Instead of traveling this year, we chose to invite everyone here. There is an 800 acre area that is very primitive and beautiful that we use for recreation. It makes for perfect camping since there are several small lakes fed by natural underground springs and surface creeks. We designate one for swimming and hillbilly spa mud bathing and one for fishing. Between the two lakes is a gently sloped hill, on top of the hill is an Indian mound that overlooks the valley and large creek below. Tent sites were set up all over the hill and down by the lakes with a huge red rock fire pit near the Indian mound and a centralized kitchen tent for cooking by campfire. It had the makings for the perfect long weekend.

We had twenty something friends and family coming and going the entire three days. There was plenty to do for all ages. The guys loved to hunt wild hog and fish while the gals and kids swam in the ice cold spring lake, did wild mud baths with the cool green mud that has to be brought up from the bottom, went hiking and did driving safaris to see deer, wildflowers and other wildlife. The kids went to help do farm chores back at the farm with me in the early evening. The chickens, miniature donkeys, cows and Guinea keets all needed attention.

At night we had a slow smoked wild hog feast with roasted corn and vegetable kabobs and the kids had s'mores. Everyone had pitched in and brought plenty of gourmet food to snack on throughout the weekend. We had Scrapple, cowboy coffee, bacon , eggs, fresh feta orzo pasta, really fantastic chalupas with smoked pulled wild hog, hummus, roasted red pepper and smoked jalapeno dip, beautiful fresh fruit salad, homemade almond toffee etc..etc..

Saturday night we had a blast hanging around the campfire tending to the smoking of the meats, telling VERY tall tales and just laughing till our sides hurt. There may have been some whiskey drinking involved but not too much since we are one of the few dry counties left in Texas. There is nothing better than sleeping next to the one you love under the stars, with the sounds of the night right outside the screen of your tent, the lullaby of the wind through the trees across the small valley.

Sunday, we awoke to a gorgeous day!
Everything was going along nicely until......
early evening, rainbows and heavy white clouds began to appear. Great photo opportunity....nice time to take the little ones on a photo safari, we were not really thinking about how rainbows are formed. We had a great drive around the property and as we made our way back the sky ahead of us grew heavy with menacing gray rain clouds as we crested the hill. Before we had a chance to speak, lighting struck nearby and the skies opened.

The first thing one of my friends said was "I hope the guys closed up the tents", one of my other friends said "I hope they stored all the chairs so they don't get soaked" and I blurted out "I hope they covered all the fire wood". As we got closer, we noticed that everyone left back at camp were all crammed under the kitchen tent which consisted of a solid metal frame. None of the things we wished for out loud had happened. In fact, the wind had increased to 40 MPH gusts and I watched two chairs go airborne and fly over the edge of the hill top, so much for staying dry.

I thought to myself...hhhmmmm...thunderstorm, severe lighting, top of hill, metal rods holding up the kitchen tent...no, not the safest place to wait it out. One of my guy friends had the same thought, he ran out making a mad dash for his truck. As he sprinted across the meadow, a lighting strike happened withing 20 feet of his fleeing feet. He hesitated but in the end, chose to continue to the truck. Smart man!

Another friend had made it back to her SUV with her two dogs and we could hear her horn honking wildly in the distance. Apparently she was a bit frightened and was trying to attract the attention of her guy, who was helping hold down the kitchen tent. I really did feel sorry for all of the bodies under the tent. They had decided to stay put and not risk the same fate that our friend sprinting across the meadow almost suffered.

Us women or "cougars" as we had jokingly decided were now content to hang out in the SUV with four little kids (ages 3,4, and two 6 year olds)...did I mention the two dogs who were afraid of thunder that were crammed in the car with us? We all hunkered down and decided to make the best of the situation. We were nice and dry and they were all wet and hanging on to a tent for dear life so I couldn't complain.

I don't have children, but now I know how parents can zone out and not hear the world crashing down around them. I pretty much tuned out all the chatter, noise and barking and enjoyed a nice chat with my friends. Meanwhile the kiddos were performing acrobatic feats in my back trunk. Only one casualty...the cute little three year old suffered a pretty good shiner accidentally (or so we hope) given by her six year old brother, with his foot, no less.

We stayed calm as we watched one tent collapse under the weight of the water, we watched another become a Picasso painting with all odd angles and rods sticking out everywhere. Finally, I watched my own humble pop up abode finally take on too much water and the top just sunk in. All this in less than an hour.

And then it ended as abruptly as it started. The sun came back out and the rainbows reappeared. We all pitched in to pick up the pieces. Two campsites came out o.k. and seasoned campers that they were, stayed to brave another night. One couple was supposed to go home that night after dinner and now were stuck with the task of packing loads of soggy camp gear, damaged tents and exhausted, excited kiddos. The other couple had just gotten there and now their tent resembled a cubist dream and our tent was intact but filled with at least two inches of water.

We decided that we would move the party to the farm house for the evening and have a campout in our den. We drank lovely white Sangria full of fresh fruit, dined on a friend's fresh vegetables from her garden & ate wild hog Posole that I had slow roasted and made the broth from scratch with some fresh tomatillos and cilantro from my first harvest.

Monday, we woke to another beautiful day in Central East Texas. Our bellies were full and we had slept in a dry bed and a new day was upon us. Little did I know that I was about to find out that when it rains, it pours...calves.... but that's another story!

I learned a lot this weekend. I realized how lucky I am to have a crazy cowboy artist in my life, to live on such a beautiful patch of Mother Earth, and to have such wonderful old and new friends to share great adventures with.

It was such perfect trip, and ultimately we did not have to go anywhere at all! There IS no place like HOME!

We plan to make this an annual or even bi-annual event. In honor of the campout, I am going to post my Posole recipe that so many of you loved!
Posted by Sandy Bates Emmons at 3:50 PM