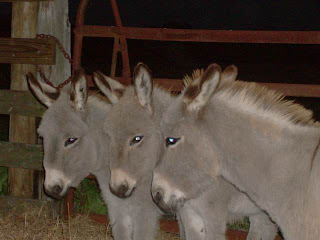 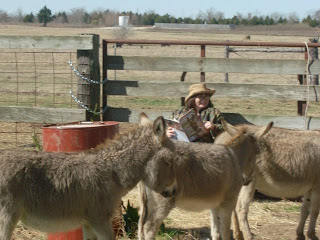 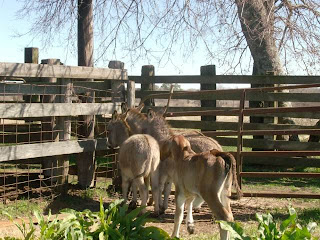 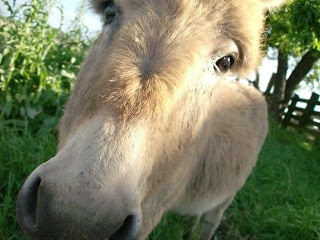 Never thought I would be known to friends & family as "the Ass Whisperer" but I now wear the name proudly. My father had race horses in Brazil so the Jockey Club in Rio was one of my favorite "playgrounds". I was pretty tiny in high school (4'11" , 92 pounds) so my dad's horse trainer would allow me to exercise the horses. I began riding regularly at the age of five, English Hunt & Western Saddle so I have always had a love for horses. Donkeys were not my thing.
Fast forward to 2009 - ZZ Topinha our first bottle fed Brahma calf arrived January 1st, her momma BB had been a show calf for my cowboys sister and had lost her calves every year since she started having them. BB was our tamest heifer of the herd and we were sad every year about losing her calves.
BB gave birth to ZZ Topinha on New Years Day while we were away camping at Inks Lake in the Texas Hill Country. When we arrived home the next day we went out to check the herd and the strangest thing had happened.
We found this beautiful baby calf in our barn corral. She was all by herself and the gates were closed and latched. BB the show heifer was standing outside as if she wanted us to know this new little baby was hers and she wanted us to do something. We noticed that BB had a bad udder bag and could not feed her calf.
I had already received an emergency lesson on how to save a calf from our dear friend Ms. Dottie Love and she had provided me with a "baby" kit (bottle, electrolyte gel, books, milk replacer etc.)
The mystery to this day is how ZZ Topinha got in the corral by herself just in time for us to rescue her. I am convinced it was my cowboy's long dead ancestors lending a helping hand. His daddy loved these cows and being in the barns so we chalk it up to a little spectral assistance.
We decided that little ZZ needed some protection from predators such as coyotes so we decided to acquire a guard donkey. My cowboy's cousin down the road raises exotics for zoos, we knew he had some so we called him up. He said sure, he had a Jenny and two Jacks and they were a package deal. Apparently donkeys never do as well solo and are almost always a "package" deal. Oh, the Jenny is pregnant and oh, they are miniatures to boot.
He delivered them the next afternoon. We placed them on one side of the barn gated away from the calf and from there the fun began. These little guys (and girl) had grown up with just a bit of human interaction. In essence, they were as wild as wild gets! Since they were going to be living with ZZ Topinha, we named them Dusty, Billy & Frank (we have a habit of naming our barn animals after musicians & bands).
I was bound and determined to tame them and I'm now going to share the secrets of the "ass whisperer":
Step One - Donkeys have a memory like an elephant so do not get frustrated. They will never forget ill treatment. Donkeys by nature are curious and will pay attention even if they are pretending to ignore you. Walk quietly, talk softly and do not make any sudden movements. Place the donkey(s) in a semi-small secure area like a corral, barn or holding area.
Step Two - Place a chair somewhere in the area and plan to stay awhile. Arm yourself with good reading material (I chose Hobby Farms magazine with a special issue devoted to donkeys) and some really good horse treats (I have had the best luck with carrot flavored biscuits). Place the treats in a bowl at your feet so the donkeys can smell them.
Step Three - Start reading out loud in an even tone, as soothing as possible. I read the history of donkeys and they seemed to enjoy it. Do not expect immediate results, in fact do not be surprised if they join ranks and travel as if they are one, stay in the furthest spot away from you and maintain giving you the equivalent of the donkey "evil eye".
Step Four - repeat step three over and over (and over) every day until you're horse...I mean hoarse! My donkeys began getting very curious about day 5, by day 12 they were eating the treats if I threw them about three feet away and by day 21 they were following me around wanting their treats from my hand.
They are now tame enough after three months that they will greet me when they see me and come in from the pasture to have a treat or two at the barn. They allow me to pet their heads and they love it when I play with them in the pasture. They treat me like one of their own by waffling and getting as close to my face as possible for a kiss. The "ass whisperer" moniker fits me perfectly! Dusty, the female, is due any day and I cannot wait to whisper in the new baby's ears.
Posted by Sandy Bates Emmons at 7:07 AM

Labels: How to tame a donkey ( and maybe horses too)