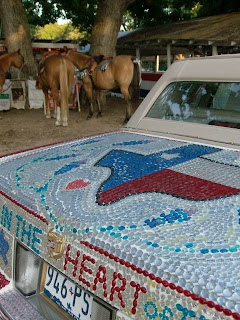 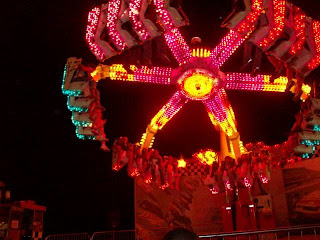 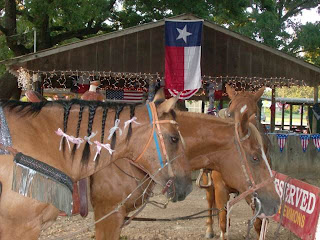 We have had quite a week and I apologize for not posting sooner. We had the three major F's happen - the fair, two funerals and a family reunion. All involved the big fourth F - food!

I can honestly say that many chickens (not mine) were sacrificed for these three East Texas rituals. Believe it or not, we had fried chicken at all four events. We also had plenty baked ham, fresh corn pudding, barbecue brisket, corn bread, purple hulled peas, homemade tamales, cakes, pies and lots of homemade ice cream.

All of these F's lead up to another F - Fat!!! We may need to add just one more F to the list this next week...fasting!

There is something very comforting knowing that the County Fair happens every year the third weekend in June. The fair celebrated it's 89th year in 2009. This is only my second year to attend but with every year that passes I get more involved. This year I entered some photographs in the home economics competition.

The fair always kicks off with a large parade. The parade floats are elaborate affairs that locals work on for months. Every year there is a different theme, this year was "Country Paradise". There were a lot of grass skirts and cowboy hats (now that's a combination). There were also plenty of duded up horses, tractors, motorcycles, all terrains, golf carts and antique vehicles.

Have I mentioned that my cowboy happens to be a well known art car artist? Well, he is. He has been making art cars since the 90's.

The "Yellow Rose of Texas" is a 1990 Cadillac that is covered in rhinestones and depicts famous Texas icons such as bluebonnets, longhorns, oil derricks, the Alamo and of course lots of yellow roses.He made this particular car for his mother's 60th birthday (over ten years ago). It took over 400 hours and 10,000 rhinestones to create.

This is by far, one of the most famous of all Texas art cars. It has won the Houston Art Car Parade and has been featured on shows such as CNN, Good Morning America and CBS Sunday Morning. It has graced the pages of Texas Monthly, Heritage Magazine and Texas Highways. It was on the cover of the Austin Travel Guide. The "Yellow Rose of Texas" garnered so much attention that it was chosen to be in the "It Ain't Braggin' If It's True" opening exhibit of the Bob Bullock Museum at the Austin State Capitol. It proved to be the most popular item in the museum. It was invited back twice and has a real place in Texas memorabilia.

Now it is on permanent exhibit at our local County museum (which I happen to be curator)instead of just being stored in the barn and we drove it in the parade as the museum entry. It is always a huge crowd pleaser! The kids all call it "The Bedazzled Car".

The parade winds it away around the old downtown square and courthouse, then goes straight down Highway 84 (which they close for the event) and ends at the fairground. It is amazing how many people stand in the Texas summer heat to cheer on their favorites. The sense of community really comes alive at this moment.

Many of the first settlers of the area have permanent camp sites at the fairgrounds and spend the preceding week decorating them with different themes. There is anything from feed sack, horseshoe and chili pepper motifs to patriotic themes that represent Texas. There are even a few confederate flags that fly, after all this is Texas, and the fair grounds are actually the Confederate Reunion Grounds.

Usually, we spend the entire week enjoying the animal judging events, concerts (Country, Bluegrass & Gospel), rides, food booths, cow patty bingo and the rodeo. Our camp has one of the best locations, it's right across from the concert pavilion, and at the gateway to the food booths and the Midway. All of my cowboy's friends, family and town characters stop by. We end the weekend with a family reunion and a late night at the camp telling tall tales and sharing a bit of days gone by.

This year was a little different as two members of my cowboy's family passed away during the festivities. It was a blessing for both. His grandmother was 93 and had been in a nursing home for many years, his eldest cousin had been ill for several years and her quality of life had been greatly diminished.
Both funerals were a celebration of life with lots of family, food and friends who gathered to pay their respects.

His grandmother (Memaw) was the best beautician in town and owned her salon for over 40 years. Everybody knew her, including the young funeral director who handled the arrangements. He added a photo to her photo montage of him as a baby, getting his first hair cut and Memaw was giving it. He was sitting on a two by four across the barbers chair because he was so tiny. My cowboy said , he too, remembered that two by four well. It was a touching moment and made me think how wonderful it is to live in a place where your life and death can touch so many. She was buried beside her husband in the family cemetery that was started by his family in the early 1800's.

Memaw's favorite treat was homemade ice cream. Even in the nursing home, we always gave her a bit of soft serve ice cream after her meal. Before her body faltered and her memory faded, Memaw made homemade ice cream all the time for her three daughters and her grandkids. Grandad and Memaw would make them homemade peppermint ice cream and they would have a good old ice cream social.

My parents and grandparents would make hand cranked ice cream for us every summer too. I can still remember the old wooden ice cream maker with the ice and bags of rock salt, later on they got an electric one but it still had the wooden barrel. It was a White Mountain brand, which has been around for over a hundred years (although I think Rival owns them now). I may be adding one to my farm wish list for future fair use.

Both my mom and grandma were awesome Southern cooks and they would make us homemade custard ice cream, this process involves fresh eggs and cooking the cream mixture to a very soft custard stage before freezing it. It adds a depth and richness that uncooked ice cream just cannot duplicate. My mom always adds in different fruits like peach, blueberry, blackberry or even fresh coconut but I like those but my favorite is just pure vanilla bean.