When It Rains It Pours..Calves! How To Save an Orphaned Calf 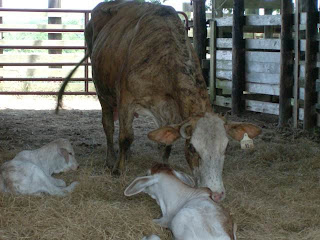 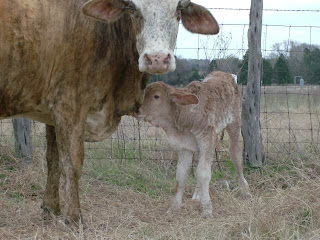 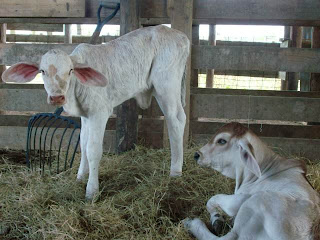 So, we had been camping out at the primitive property on Memorial weekend with a group of our friends until an intense short lived storm took out several tents and put a damper on staying out in the wilderness. We opted to move the camp out to our farm house and have a nice roof and dry bedding for everyone to enjoy.

Memorial Day itself could not have been prettier, the sun was shining, the breeze was blowing and several newborn calves were about to take a very different path (that inevitably leads straight to the misfit corral).

We took a couple of our friends and their 2 children (ages 6 & 3) for a farm tour. First up, a visit to the chicken coop. I knew it was a bad omen when my broken beak hen had passed away in the night (she had a broken beak since day 3 of her life and I guess it caught up to her). The kids took it much better than I did, so we carried on (no time to mourn my chickens untimely demise). We fed treats to some of the donkeys and calves and even had one of our 2000 pound Brahma mommas stick her head in the SUV window to lick the toddler. Not sure if she was amused but all the adults sure were!

A trip to the back pasture proved even more interesting as we encountered two things happening at once. One of our cows was in the throws of labor and another cow had extremely swollen udders and could not feed her newborn.

Life lessons for our little city slickers - as we watched one being born the other had to be lured to the corral area with her calf so we could take control of the situation. We left the other cow in labor alone, as everything looked like it was going along fine. Which, I have now learned, never assume things are going along fine on a farm.

After our friends had the eventful tour, they headed back to the city and we headed back to the pasture. By this time we had called in back-up, my cowboy's momma and sister had come to help too. The first piece of business was to get old cross bred momma into the corral with her calf. Easier said than done, but let's just say we are good truck wranglers.

As we returned to the pasture we were shocked at what we saw next. The purebred registered Brahma had died while giving birth (prolapsed uterus)and there was no calf on the ground. Everyone assumed the worst but as we drove off, I noticed something happening in the cow herd.

To my surprise, far off in the distance I could see a newborn calf trying to suck on every cow it went up to. I knew this was the orphan. We raced over and snatched up this little blue eyed bull, brand new umbilical cord and all and made our way back to the corral. Not before I got a pretty good hoof to the chin.

We named the heifer baby Pink Olive and the little bull King Nandi (in honor of our farm guests that day). They are now almost two weeks old and alive and well.

All in a days work....another circle of life, death & everything in between on the farm.

How to Save an Orphaned Calf:

1) It is important for the calf to receive Colostrum within the first few hours of birth. It's chances for survival increase drastically. If there is another heifer who has just given birth in the same pasture, corral her and her offspring and place her in the shoot where she can be milked or can be still so the orphan can drink.

2) Place the orphaned newborn on her udder and see if it will begin sucking. Be patient, this could take several attempts. Be sure the surrogate heifer is restrained because her instinct will not be to allow this orphaned calf to suck. Meanwhile, collect enough colostrum in a large baby calf bottle for back up and to scent the calf (more about this in a minute).

3) If you do not have a surrogate heifer available, you should keep an emergency kit on hand that includes a bag of instant colostrum, use this if no other colostrum is available. Even better, fresh colostrum freezes very well and can keep in your freezer for up to a year. Harvest fresh colostrum from one of your cows every year and place it in a ziplock gallon freezer bag. If you end up with an orphaned newborn or some other situation, just gently unfreeze the colostrum in some warm water and feed it via baby bottle or large oral syringe.

4) Once the newborn is fed, the next step is to get the surrogate to except him/her as her own along with her other calf. I had always heard that you can "scent" the calf and fool the surrogate. We rubbed down the real calf real well with our hands and then rubbed the orphan down with the real calf's scent. We also dowsed the orphan with a lot of the surrogate's colostrum/milk. This trick worked. She had no trouble accepting the orphan.

5) If all else fails, ALWAYS have electrolyte gel packs on hand to give the newborn and a bottle full of milk replacer. Tractor Supply has all of these things and if you live far from one like we do, it is always better to have all of this on hand. We learned the hard way.

Epilogue: In the end, the surrogate cow had plenty of milk for both calves but had a serious case of mastitis. Her milk was bad because of this. Both calves are being fed with milk replacer by bottle. I am proud to report that both are fine and now think we're their momma!
Posted by Sandy Bates Emmons at 2:43 PM