Clicking My Heels For Joy! or How To Train a Baby Donkey 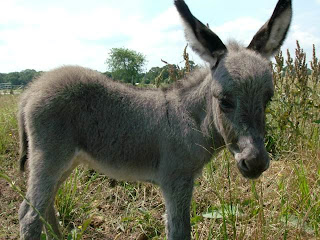 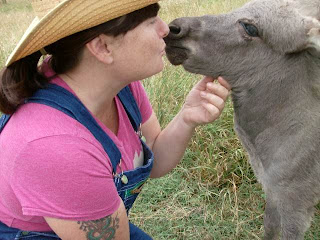 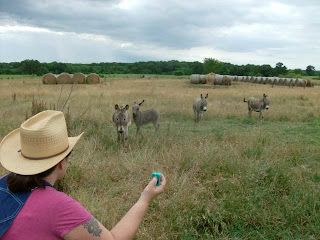 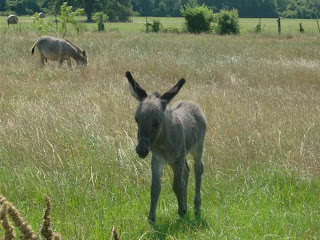 I am clicking my heels and my training "clicker" with joy of the birth of my first miniature Mediterranean donkey here at Feed Me Farms. I fell in love with these energetic little creatures while visiting Sicily in 2003. I had encountered them in a little mountain side village named Floresta near the Mt. Etna volcano. I only saw them from a far but it was love at first sight for me.

Donkeys have been domesticated for over 5000 years and come in all shapes and sizes. With the help of modern day DNA testing it is now widely accepted that almost all donkeys are descendants of the African Wild Ass. Some of the first evidence of domestication was found in an Egyptian tomb where 10 donkeys were buried with full regalia along with a long forgotten king.

It is believed that ancient Egyptian merchants sold or traded asses to other ancient cultures thus populating the Middle East and Mediterranean with this wise and revered pack animal. Damascus, was once known as "The City of Asses", obviously because of one of it's most famous commodities.

Mediterranean or Sicilian donkeys are famous for their distinctive markings. Most have a prominent cross like marking across their back and shoulder. It is said they were given this mark for having been so faithful and loyal to Jesus. They are always featured in the traditional manger scene.

Closer to home, we had been waiting since early Spring for this little bundle of fur to arrive here on our Texas farm. We acquired 3 little Sicilian donkeys at the beginning of the year to keep our first bottle fed calf, ZZ Topinha, company. We bought an adult Jack, Jenny and their one year old Jack offspring (it was a package deal, donkeys are notoriously lonely without companions). We named them Billy, Frank and Dusty in homage to the band ZZ Top. When they were delivered we noticed Dusty was either really, really well fed or pregnant. Well, pregnant she was and getting bigger and bigger day by day.

We waited and waited and WAITED...I had no idea that a Jenny can be pregnant for 360 to 375 days!!!! Can you imagine if a human had to carry a baby for over a year! All of our friends and family would ask "Have you had that baby donkey yet?". My standard response became "Not yet, but I swear it has to be any day now".

One afternoon a little over a week ago, I walked out to the side pasture to visit and to my surprise, there was an extra set of ears slowly making their way through the tall grass. I started yelling for my cowboy, I was so excited I tripped and fell in cow manure but did not even notice (until later when I tracked it all over my hardwood floors).

We named her Pearl, again a little reference to ZZ Top...just think, the next one will have to be named "Tush" !

How to "clicker" train a donkey:

1) Clicker training can be used with any animal. An inexpensive clicker can be picked up at any big pet store for less than $5. It can be one of your best investments on the farm. I use it for training the calves, chickens, Guineas and the donkeys.

2) Use the clicker in conjunction with treats or food. Animals of any kind are always more motivated when there is a little bribe of food involved. I use carrot or apple baked biscuits for the donkeys and calves. They love both.

3) Stand at the gate entrance or barn entrance and call out to the young donkey. Click as loudly as possible with the clicker. As the donkey approaches kneel down and continue to click until the baby comes up to you. Reward with a treat and plenty of petting.

4) If you want to teach them to follow you anywhere, make the clicking, treat reward, clicking into a game. Click a few times, get them to follow. Once they begin to follow you, reward with a treat or a pat on the head. Pretty soon, the clicker may no longer be needed but sure comes in handy if they are far off in the pasture!
Posted by Sandy Bates Emmons at 8:21 AM

Labels: How to clicker train a baby donkey