Oh No! Yet Another Mouth to Bottle Feed 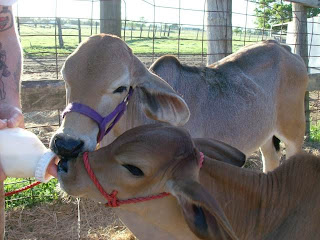 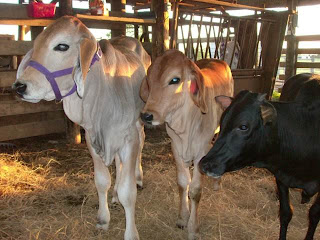 Being a published food writer and former restaurant owner, one day, I suppose I will get to write about my heirloom garden and recipes that I want to share.
But for now, we have had more pressing matters here around Feed Me Farms. One of our Brahma Mommas had to be put down after slipping in a muddy pasture severely breaking her hip and leg. Keep in mind, our cattle are like pets, especially our heifers who live their entire lives here on the farm munching away on coastal grass and lounging in the meadows. Sadder still was the little calf that was orphaned.
This would be my second calf to bottle feed as I had just finished weaning ZZ Topinha (my first bottle fed calf that could not get proper nourishment from a bad udder). I had fed ZZ since day three of her life but this new calf would be a different story, she was already six weeks old and wild as can be. She had really never had any human interaction.
All that was about to change. My real life cowboy and his cousin roped her and placed her in my make shift nursery corral. There she was joined by ZZ Topinha and Beauregard. Beauregard is a one year old miniature Zebu that came to live with us recently. Beau is smaller than the calves and is already full grown so he is here by default.
As she ran around the corral bucking, kicking and trying anyway she could to bust out, her name suddenly came to me. Jezebel!
We decided the best way to get Jezebel to take a bottle was to learn from a pro, so back to the bottle for the weaned ZZ too.
Off I went to prepare 3 huge bottles and see if we could get this little one to drink, the plan was to give her two of the bottles and ZZ would get one for show.
Here is a step by step in case you find yourself in this very same predicament (with or without an experienced calf to lead the way).
Step One - As long as the calf is more than a few days old and has had it's mothers colostrum it is o.k. to feed it a milk replacer purchased from Tractor Supply or your local feed store. I also like to feed one electrolyte gel pack in case of dehydration. I have found that the non-medicated milk replacer is better and the calf is less likely to reject it. I use warm water and once the replacer is mixed, I put a dab of molasses on the tip of the nipple. The molasses seems to get their attention.
Step Two - Using a calf halter, tie the calf to a post or fence and walk and talk gently to it. We actually brushed Jezebel to calm her and then proceeded to drip a little of the milk on the tip of her nose to activate her sense of smell.
Step Three - If the calf will not take the bottle on its own, it's time to take action. Grasp the calf's mouth and pry her lips open. Cows only have lower teeth so do not hesitate to place your fingers inside. Position the bottle in her mouth and give the bottle a squirt. It may take a few trial and error starts and stops. Do not get frustrated, back away, allow the calf to take a break and then start all over again.
If you are lucky, you will have a ZZ Topinha like we did to show the new calf the ropes. ZZ was happy to lick the dripping milk from Jezebel's mouth after sucking down her own training bottle!
Just when we thought we could get away for 48 hours or so, we are back to square one - bottle feedings twice a day. In a way I am secretly happy, I was sad the day I thought I had given ZZ her last bottle. The world really does work in mysterious ways.
Posted by Sandy Bates Emmons at 10:52 PM

Labels: How to bottle feed an orphaned calf