Wok It To Me! (first meal from the garden) 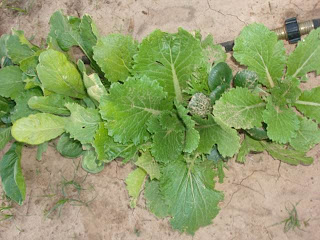 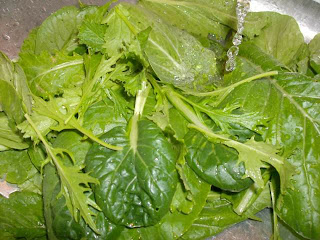 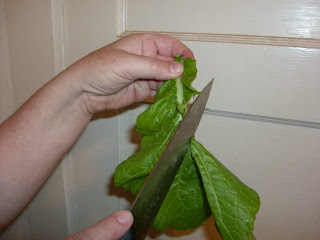 As I get ready to leave for Austin today for a Mid America Arts Alliance meeting, I contemplate what to color coordinate with my surgical mask. Just making light of the situation but with the swine flu pandemic raising its ugly head, I am more afraid to go into a big city and would just prefer to hang out here on the farm.
I promised a recipe and some food history so I'm writing this as I wait out the rain storm that is raging across Texas (4 1/2 inches so far in the last two days.
As a child, one of my fondest memories was eating at this Japanese restaurant we used to go to once a week in Fashion Island, Newport Beach. I was born in Newport Beach (so I am the real OC girl thanks to my dad's side of the family). Just for the record, I thank my lucky stars for my Texas roots from my mom's side and I really feel more Texan (as the saying goes, I got here as fast as I could).
Back to the story....I loved that my entire family would order a Japanese dish called Sukiyaki. The Japanese waitress (in full kimono attire) would bring out all the ingredients and cook it for us at the table. It was my favorite Japanese dish till I discovered sushi a few years later.
Stir Fry is actually an Ancient form of Chinese cooking but all cultures have variations and that is why I like to mix up some of the unique flavors from each culture. My Stir Fry includes Mirin (Japanese sweet cooking rice seasoning) and I top my dish with some Sambal Oelek , a fiery hot chili paste popular in Indonesia, Malaysia & Singapore. Do not be afraid to cross cultures in your cooking adventures!
Stir Fry is an ancient way of Asian cooking. It traditionally involves cooking in a hot pan with small amounts of fat or oil, cooking rather quickly to preserve the color and texture of the ingredients. Beef was not a traditional ingredient in Chinese cooking till around 4000 BC when cattle was introduced from Western Asia. It was quite expensive and exotic so it was used sparingly. Buddhists would not eat meat so a protein was developed around 1000 AD during the Sung Dynasty using soy which became known as bean curd or tofu.
There are two traditional ways of stir frying, Chao & Bao. Chao is similar to Western sauteing (layering the ingredients) where Bao uses the technique of cooking all at once. I like the Chao method for this recipe.
Here are a few tips to make your cooking easier:
1) WASHING & DEVEINING GREENS - Fill your sink with water and allow your greens to float for several minutes, swish them around with your hands to knock the grit or dirt off. Drain and repeat one more time. The easiest way to devein your green is to grap the washed leaf by the stem (closest to the root) and with a very sharp knife, run the blade downward along the main vein on each side. Allow the leaf to fall back into the sink and put the stem in your compost bin. Repeat till all leaves are done.
2) ORGANIZE YOUR INGREDIENTS - The key to a good Stir Fry is to have everything cleaned, sliced and ready to go. This is called "Mise En Place" the French term for "Put In Place", a religion for chefs like Anthony Bourdain, he refers to it often.
I like to line up everything in order including spices etc..
I cannot express the pure joy of pulling up the greens straight from the ground and placing them in a pan less than an hour later! The Siamese Dragon Stir Fry Mix I grew was from seeds purchased from Baker Creek Heirloom Seeds. This is by far my favorite seed catalog and you can order it from rareseeds.com
Posted by Sandy Bates Emmons at 10:54 AM